Up to 6 hours of battery life with a doublerechargeable lithium battery.

A portable oxygen concentrator capture the surrounding air and, after having passed through a particulate filter, the channeled towards a pump with the aim to increase the pressure.
After the passage in electrocau pump, the air is directed through the filters of zeolite, capable of separating molecules of oxygen from the other gases present in the air.
The oxygen that escapes from the filter, with a high purity, is conveyed towards the patient after passing through a filter for the dispensing nozzle, passes through the nasal cannula.
The remaining gases are naturally present in the air, are expelled from the back of the device and put back into the environment.

The oxygen supply is carried out with the "PULSED-WAVE" technology.
Traditional systems (liquid oxygen, concentrators of the old generation, etc.) deliver oxygen with a continuous flow, making the patient totally passive: in fact the oxygen is delivered both during inspiration than in expiration phase.
In contrast, the technology of pulsed-wave Inogen One is capable of delivering oxygen only when the patient requests it, thus allowing it to better oxygenate the pulmonary alveoli and practice an effective rehabilitation exercises. 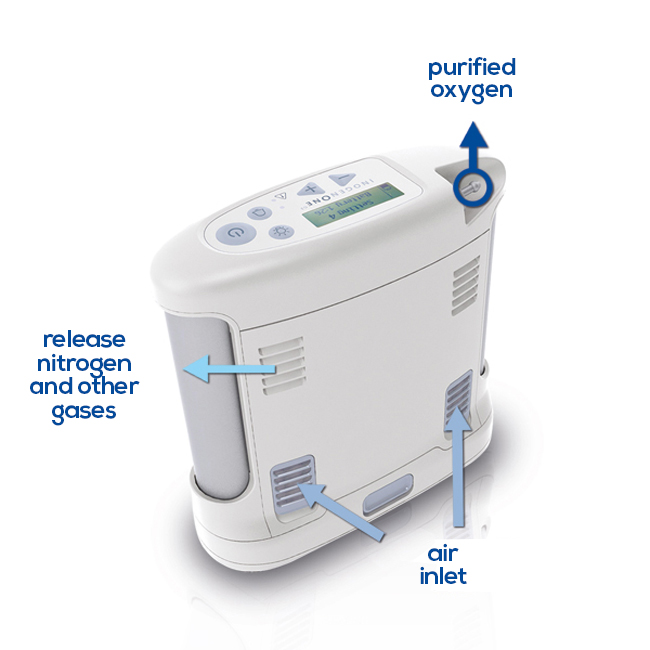 Inogen One provides more independence for oxygen patients. This oxygen machine is designed to serve in multiple roles, including home oxygen, portable oxygen and travel oxygen. The G4 Concentrator is an advanced design and upgrade of the original Inogen One Concentrator for oxygen therapy patients. In comparison with the original, the Inogen One G4 is the smallest in size and more lightweight. The Inogen One G4 Oxygen Concentrator is able to go where you need to go, when you need to go. It has a longer battery life between recharging--now up to 3 hours for the 8-cells battery and up to 6 hours for the 16-cells battery. An automotive adapter provides power and recharging while in route to your destinations, allowing you to shop, visit, and explore for extended periods. Purchasing additional batteries can extend your time away from power sources even longer.

Inogen One G4 - Features and Benefits

Be the first to write your review!

The portable oxygen concentrator Inogen One G4 is indicated for patients with the following diseases:

NOTE: The machine is recommended for patients who are breathing under stress up to 3 liters/min real

Warning: it is advisable to turn on and maintain the device into operation for at least 5 minutes per week. In the event of prolonged inactivity (over two weeks) you must disconnect the battery; if this is not done, you may encounter problems on the electronic management, which cause the lock device; If this occurs, you need to contact support (such damage is not covered by warranty).

Inogen One vs. Continuous Flow Brochure

Traveling with the Inogen One Brochure

9 other products in the same category:

To be determined Shipping
0,00 € Total